Back to blog
Compliance

Misclassification of Employees as Independent Contractors: Everything You Need to Know

One of the most notable cases of a huge company misclassifying the employees dates back to 2016. Uber and almost 400,000 drivers from California and Massachusetts (classified as independent contractors) reached a $100 million settlement during a class action lawsuit, only for it to be thrown out by a federal court as insufficient in the compensation it provided the Uber drivers.

Uber faced a couple of similar charges in the UK as well, when tribunal judges decided two Uber drivers should be entitled to the minimum wage.

These are far from the only cases of employee misclassifications. The gig economy seems to depend on freelancers, independent contractors and single-project-based workers, as they are cheaper to hire and there are fewer responsibilities tied to their work.

However, the government agencies won’t hesitate to penalize the companies that violate the worker classification rules. This is why we decided to cover them in this article — so you don’t make the same mistakes as Uber.

By the end of the article, you will learn:

Disclaimer: This article is informational and should not be used as legal advice.

What is the misclassification of employees?

Misclassification of employees is the (often illegal) practice of categorizing the workers as independent contractors, rather than registered company employees.

This practice enables employers to cut back the costs for their employees. On the other hand, misclassified workers are underpaid and left without critical employee benefits and protections they are entitled to by labor laws.

Misclassification of workers also has a negative impact on federal governments and the United States government. When employers avoid paying unemployment taxes, unemployment insurance and other federal taxes and premiums according to state law, the government loses a substantial amount of tax revenue.

Therefore, employee misclassification most often results in some type of tax evasion.

To fully understand the motive behind (intentional) worker misclassification, it’s useful to know the difference between employment taxes businesses need to pay, and duties related to hiring independent contractors.

When a business hires employees and registers them as such, they need to report and deposit multiple employment and payroll taxes for each worker.

According to the IRS (Internal Revenue Service), these taxes consist of:

In order to transmit these forms to the Social Security Administration, a Form W-3 (Transmittal of Wage and Tax Statements) is used.

Taxes and forms for independent contractors

When you hire an independent contractor, the first thing to do is to have them complete Form W-9 (Request for Taxpayer Identification Number and Certification).

As of Tax Year 2020, you also need to complete Form 1099-NEC (Nonemployee Compensation) for each person you paid $600 or more for services they provided during the year (previously reported in Form 1099-MISC Box 7). By January 31, you need to provide both the IRS and the contractor with a copy of this document.

Independent contractors count as self-employed workers. They are required to file the Annual Tax Return and pay the estimated income and self-employment tax on their own.

Both Independent Contractors and Sole Proprietors are considered to be self-employed for tax purposes. The tax obligations are similar — if you’re a Sole Proprietor and want to know more about your legal requirements, take a look at our Sole Proprietorship Guide. 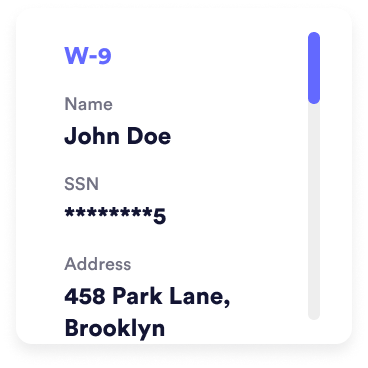 From collecting tax forms to storing them all in one place, we automate everything, so you can stay focused on growing your business.

What are the consequences of misclassifying workers?

From the obligations stated above, it’s clear that the main reason for purposefully misclassifying the employees is saving on labor costs. According to the National Conference of State Legislatures, businesses can save up to 30% by hiring independent contractors instead of employees.

At the same time, the government suffers a great loss in income. A Harvard University report from 2019. shows that the misclassification of workers in Washington State resulted in millions of dollars of revenue lost. Additionally, tens of thousands of workers were denied fair salaries and benefits guaranteed by the employment law.

Individual workers suffer the most from being misclassified.

This means that the minimum wage, overtime pay, hours worked, record-keeping, and youth employment standard (including child labor prohibition) aren’t guaranteed to the workers. There is no compensation for work-related injuries, equipment damage, medical leave or unemployment benefits for independent contractors.

The only way for the workers to protect themselves and secure benefits is to purchase a good insurance plan and pay for it from their own pockets.

The line between contractor and employee often gets blurred, especially if you keep hiring a great contractor that understands your needs as an employer. Here’s what to do when the independent foreign contractor starts to look too much like an employee. If you opt for hiring non-US citizens, be sure to learn about the necessary tax forms for foreign persons and entities.

The risks of misclassifying employees As independent contractors

Misclassified employees can file a complaint against their employers and demand reparations. These may include paying health, welfare or 401k contributions, paid time off, various subsequent payments, and more.

Apart from a bad reputation, employers who classify their workers inaccurately are at risk from substantial financial penalties, or even jail time.

In case the law enforcement decides the misclassification was an honest mistake, you may need to pay:

In case you don’t manage to prove to the IRS and DOL that you accidentally misclassified the employees as independent contractors, the consequences get more severe. You may need to:

To avoid making this mistake, keep reading — we’ll provide you with extensive tips on learning how to classify your workers properly.

How to determine whether the worker is an independent contractor or an employee?

They cannot be ordered to work during certain hours or at specified premises. Independent contractors also decide how much they’ll charge for their work, and what the final product looks like — and the employer can take it or leave it as it is.

If the employer has the right to considerably control the work, the worker should be classified as an employee. Employees are under businesses’ financial and behavioral control, with more strict standards regarding the work results. Also, employees are often contractually forbidden from providing the same or similar services to other businesses, especially the competitors.

In addition to general advice, we strongly recommend you to have a look at two types of tests that help with distinction: The IRS Test and The Department Of Labor (DOL) Economic Reality Test.

The IRS proposes that employers consider the following categories when deciding how to classify the workers:

These factors and the consequences of misclassifying are thoroughly explained here.

If it is still unclear how to prevent contractor misclassification, employers should file the Form SS-8 (Determination of Worker Status for Purposes of Federal Employment Taxes and Income Tax Withholding) with the IRS. It can be filled both by the employer and the worker.

In September 2020, the U.S. DOL proposed rules that determine whether the worker is an independent contractor or an employee under the FLSA. These rules dictate that:

The Wage and Hour Division of US Department of Labor (DOL) investigates the employers to find out if they violate the FLSA provisions.

State wage and hour laws (minimum wage, overtime compensation, work breaks and damages for violations) vary greatly from one state to another. These are just some examples worth mentioning:

Here you can find a table with detailed description for each state.

Employee misclassification causes the state to lose money and workers to lose employment benefits, fair wages and job security. Employers risk considerable penalties and even jail sentences in some cases, in addition to tarnished company reputation.

Deliberately misclassifying the workers is not worth the risk. When it comes to mistakes — we can prevent them from happening.

Deel creates contracts that are fully compliant with local labor laws. Onboarding highly qualified workers from all over the world takes minutes — without the need to hire a law firm or set up a local entity.