Not your typical marketing agency, EMF Media operates like a growth incubator for startups and brand-builders across Europe. They’re focused on helping brands build from the ground up by offering full scale marketing services, specializing in the e-commerce industry.

Being a marketing agency, they often work with freelancers, and independent contractors. This made things difficult from an HR perspective, as there were varying contract conditions and employment types. Having to manage different contracts, along with payroll, quickly became incredibly tedious, and time consuming. Not to mention, it was a headache bringing on new talent, which created a bottleneck in growing the team.

Using DocuSign, an agency, and email, Vercel found it hard to have complete transparency over new contracts and company additions. Copies of signed documents had to be manually stored and most tracking took place with spreadsheets. Once the team started to grow, the process became painstakingly long, and managing workflows quickly became overwhelming.

At one point, EMF Media was using 5 different platforms in order to accommodate the different payment requirements for each contractor. Payroll was messy, and the team would spend hours on end working to get everyone paid on time. It was a very decentralized process, and they had to have multiple bank accounts in order to pay their team.

How we Deel with it

Onboarding Deel completely overhauled their hiring and payroll process. With the contract templates, and flexibility to hire pay as you go, milestone based, or full time contractors, EMF Media has no problem onboarding new team members. Centralizing their payroll has also reduced their workload significantly, and they can accommodate their contractors payment options with ease. With Deel, the team has onboarded 48 contractors across 15 different countries.

Since bringing Deel to EMF Media, the team has cut 50% of the time spent navigating different platforms, and manual process from onboarding to payroll. Not only have they been able to allocate those resources elsewhere, but it’s also given them the tools and flexibility they need to scale.

Deel has become a vital platform in their day-to-day operations, but has remained straightforward, simple, and easy to use. It’s given their team a feeling of security, and has elevated their remote working experience, making the team at EMF media feel more comfortable, connected, and empowered.

Flexible payroll options in order to accommodate team members with different requirements around the world. 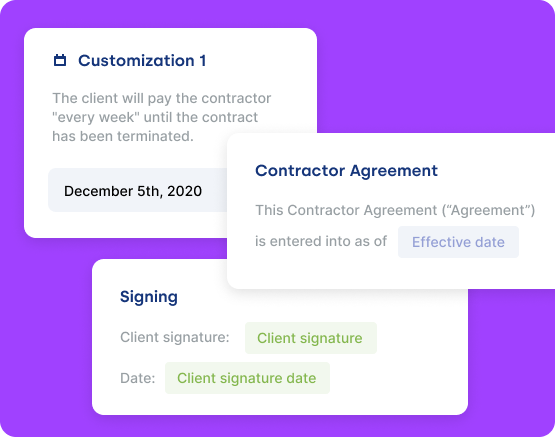 Easy to use contracts, regardless of whether contractors are pay-as-you go, milestone based, fixed invoice, or full time employees.